The liberal arts consists of seven branches of knowledge that prepare students for lifelong learning.

The concept is Classical, but the term Liberal Arts and their division into the TRIVIUM and the QUADRIVIUM date back to the Middle Ages.

The Trivium and the Quadrivium 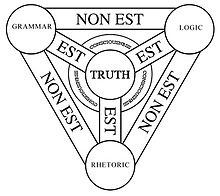 These arts of reading, writing, and reckoning have formed the traditional basis of liberal education, each constituting both a field of knowledge and the technique to acquire that knowledge. The degree bachelor of arts is awarded to those who demonstrate the requisite proficiency in these arts, and the degree master of arts, to those who have demonstrated a greater proficiency.

Today, as in centuries past, a mastery of the liberal arts is widely recognized as the best preparation for work in professional schools, such as those of medicine, law, engineering, or theology.

Those who first perfect their own faculties through liberal education are thereby better prepared to serve others in a professional or other capacity.

Source: The Trivium: The Liberal Arts of Logic, Grammar, and Rhetoric
by Sister Miriam Joseph Rauh, C.S.C., (1898-1982) earned her doctorate from Columbia University.
A member of the Sisters of the Holy Cross, Sister Miriam was professor of English at Saint Mary’s College from 1931 to 1960.