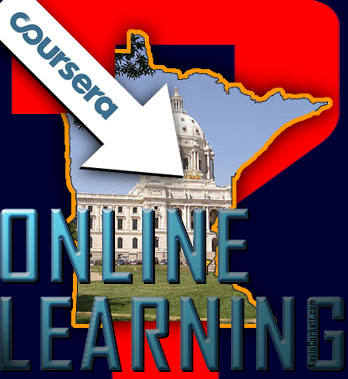 An article from Ars Technica today seems to paint a different picture from the early and emotional headlines regarding the state of Minnesota’s reported “ban” of Coursera’s  free online courses.

The Chronicle of Higher Education reporter Katherine Mangan seemed to start the furor with the headline Minnesota Gives Coursera the Boot, Citing a Decades-Old Law. It was picked-up and spread via Slate’s article:  Free Online Education Is Now Illegal in Minnesota

Most everyone was shocked that Minnesota would want to ban FREE online courses. This will certainly be an interesting story to track and the Ars Technica article provides a different perspective. AS DO the comments found at the bottom of the original article.

No, Minnesota did not kick Coursera out of the state (Updated)

Despite many media reports that Minnesota has forced online education platform Coursera to forbid Minnesotans from taking classes online, the state official in charge of this policy says it has done no such thing.

On Thursday, the Chronicle of Higher Education reported that Minnesota had “given Coursera the boot.”

It is true that Coursera has changed its terms of service to include a cautionary note advising universities offering courses via the California startup that they could not do so in Minnesota without authorization from state regulators.

“If you are a resident of Minnesota, you agree that either (1) you will not take courses on Coursera, or (2) for each class that you take, the majority of work you do for the class will be done from outside the State of Minnesota,” the terms, which were changed in August 2012, now read.

However, the state official in charge of enforcing this policy told Ars that his office does not have the power to regulate Coursera, as the company doesn’t offer courses directly. Rather, Coursera acts as a middleman for universities (including UC Irvine, Stanford, and many others) that want to offer free courses online.

“I don’t care what they do; we don’t regulate them,” George Roedler, the manager of institutional registration and licensing at the Minnesota Office of Higher Education, told Ars on Thursday.

“I specifically said that [Coursera] didn’t have to put anything on their website. They could do what they wanted. They could ignore it. They chose this route and the reason I believe they did it was to try to protect the schools in their wake. So be it. That’s what they did.”

Indeed, the change of the terms of service appears to be a precautionary measure to skirt potential violations of Minnesota law.

Roedler explained that Minnesota’s state law requires that educational institutions serving Minnesotans must be registered with the state—and pay a fee that can go as high as $12,000—as a means for the state to keep an eye on what’s going on. He added that the law had been around for decades, and that many other states have similar laws on their books.

“It’s a consumer protection law,” Roedler added. “We have had situations where in the past this law was enforced through student complaints. If we register the school, we have some control over the school. We have some standing over them. [We can say]: ‘You’ve mistreated this student—come into compliance.’”

A co-founder of Coursera told Ars that the company was informed of Minnesota’s law in July 2012 and changed its terms of service the following month. In addition, the company does not even know how many Minnesotan students it has.

“While is it up to individual institutions to choose whether to apply for permission, the Terms of Service amendment is intended to protect all of Coursera’s partner universities with respect to Minnesota’s laws,” Andrew Ng told Ars in an e-mailed statement.

UPDATE (Saturday): Some astute commenters have noticed that Slate is now reporting that Minnesota is clarifying its position and doesn’t want to discourage Minnesotans from using Coursera.

“When the legislature convenes in January, my intent is to work with the Governor and Legislature to appropriately update the statute to meet modern-day circumstances. Until that time, I see no reason for our office to require registration of free, not-for-credit offerings.”