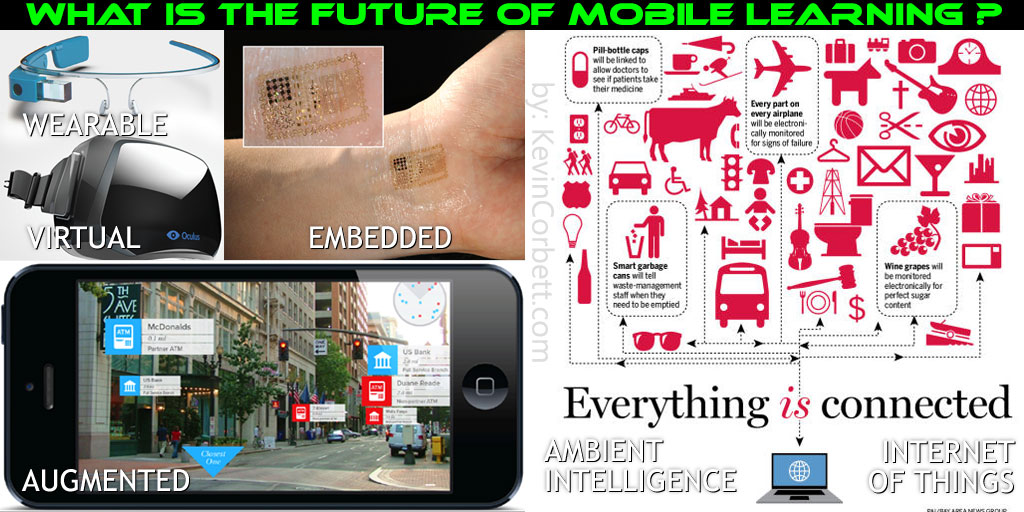 This page continues to be a work in progress

The advances in technology really beg the question as to whether “mobile learning” and “elearning” can be separate entities. The ubiquitous nature of the Internet and increases in connectedness in both people and the environment make learning possible in many ways that are mobile and without the devices we typically think of needing for “education”.

Consider for example the educational implications of this recent example:

A friend had just purchased a Google Watch and we were talking about his favorite baseball team (RedSox), when the phone instantly displayed their schedule and latest score.

How is that possible? The phone LISTENS to its environment. (Other devices do this now too: XBOX, Facebook mobile app, amongst others)

What is the Future of Mobile Technology and Learning?

This page is a work in progress and an opportunity to share with others the power, potential, and developments in technology related to mobile devices and mobile learning. Future separate posts will share my thoughts on the moral/ethical implications, concerns and other thoughts I have on these developments.

For now, share the page and your thoughts in the discussion! Thanks

Information and experiences that are presented to individuals in specific places.

Definition: Technology that superimposes a computer-generated image on a user’s view of the real world, thus providing a composite view.

Sight from Robot Genius on Vimeo. 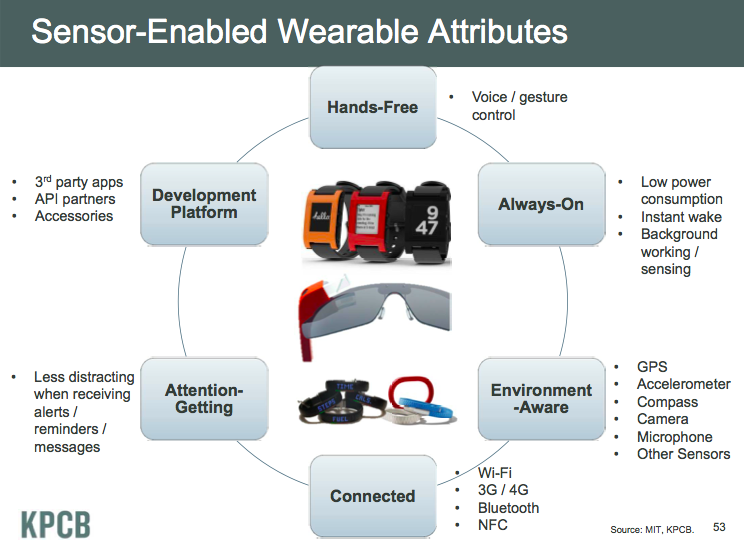 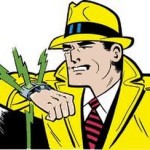 I was an early backer of the Pebble Watch on Kickstarter back in May of 2012, which received over $10 million dollars in backing (their goal was $100K). It was arguably the first watch to bring us closer to the 1930’s comic strip Dick Tracy.

The success of Pebble ushered in many more similar watches by other companies, with increasingly greater powers and wearable technology only continues to increase.

Wearable technology continues to expand in other areas. I’m a big fan of my FitBit for fitness, sleep, and diet monitoring. Future wearable technology won’t be something you’ll have to remember to put on because it will be embedded INTO people.  [A] [B]

In computing, ambient intelligence (AmI) refers to electronic ENVIRONMENTS that are sensitive and responsive to the presence of people.

Ambient intelligence is a vision on the future of consumer electronics, telecommunications and computing that was originally developed in the late 1990s for the time frame 2010–2020.

In an ambient intelligence world, devices work in concert to support people in carrying out their everyday life activities, tasks and rituals in an easy, natural way using information and intelligence that is hidden in the network connecting these devices (see Internet of Things).

As these devices grow smaller, more connected and more integrated into our environment, the technology disappears into our surroundings until only the user interface remains perceivable by users.

Ambient intelligence is closely related to the long term vision of an intelligent service system in which technologies are able to automate a platform embedding the required devices for powering context aware, personalized, adaptive and anticipatory services.

I can’t help but think of a couple dystopian Science Fiction movies I grew-up with that I think apply here [1] [2] but, will save my in-depth personal thoughts for later posts.

Watch these two video to learn more about the Internet of Things:

The Internet of Things (IoT, also Cloud of Things or CoT) refers to the interconnection of uniquely identifiable embedded computing like devices within the existing Internet infrastructure. Typically, IoT is expected to offer advanced connectivity of devices, systems, and services that goes beyond machine-to-machine communications (M2M) and covers a variety of protocols, domains, and applications. The interconnection of these embedded devices (including smart objects), is expected to usher in automation in nearly all fields, while also enabling advanced applications like a Smart Grid.

Things, in the IoT, can refer to a wide variety of devices such as heart monitoring implants, biochip transponders on farm animals, automobiles with built-in sensors, or field operation devices that assist fire-fighters in search and rescue. Current market examples include smart thermostats such as the nest and washer/dryers that utilize wifi for remote monitoring.

A very new and unique mobile phone that gives understanding of space and motion as it tracks your 3D position with millions of calculations per second.  Localization and mapping provides interactions with one’s environment like never before.