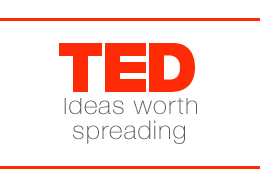 We believe passionately in the power of ideas to change attitudes, lives and ultimately, the world. So we’re building here a clearinghouse that offers free knowledge and inspiration from the world’s most inspired thinkers, and also a community of curious souls to engage with ideas and each other.  – TED Mission Statement

Richard Saul Wurman and his partner Harry Marks founded TED in 1984 and the Technology, Education, and Design Conference has been held annually since 1990.

Since June 2006, the talks have been offered for free viewing online, under Attribution-NonCommercial-NoDerivs Creative Commons license, through their web site at http://www.TED.com

TED is not without detractors (Against TED by Nathan Jurgensen) but, I’ve always enjoyed learning something new from the TED videos. There are so many incredibly interesting topics presented succinctly from some amazing people. As Albert Einstein is quoted: “If you can’t explain it to a 6-year old, you don’t understand it yourself”.

Recently, TED Ed was formed and pairs the outstanding TED talk videos with talented animators to give the talks even more impact with complimentary images and graphics. TED Ed has a high-powered advisory board which includes Jackie Bezos, Melinda Gates, Sir Ken Robinson, & Salman Khan.

I have SO many favorite TED talks, and if forced to choose only a couple, two I keep coming back to are:

HOW ABOUT YOU? Please leave YOUR favorite TED Talks in the Discussion Box at the end of this post

1 thought on “Why We’re All TED-heads [INFOGRAPHIC]”