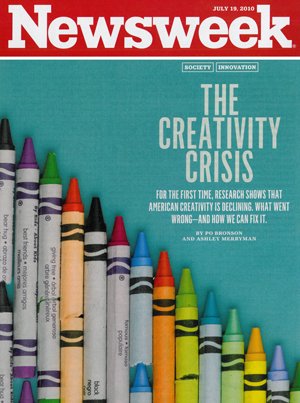 Back in 1958, Ted Schwarzrock was an 8-year-old third grader when he became one of the “Torrance kids,” a group of nearly 400 Minneapolis children who completed a series of creativity tasks newly designed by professor E. Paul Torrance. Schwarzrock still vividly remembers the moment when a psychologist handed him a fire truck and asked, “How could you improve this toy to make it better and more fun to play with?” He recalls the psychologist being excited by his answers. In fact, the psychologist’s session notes indicate Schwarzrock rattled off 25 improvements, such as adding a removable ladder and springs to the wheels. That wasn’t the only time he impressed the scholars, who judged Schwarzrock to have “unusual visual perspective” and “an ability to synthesize diverse elements into meaningful products.”

The accepted definition of creativity is production of something original and useful, and that’s what’s reflected in the tests. There is never one right answer. To be creative requires divergent thinking (generating many unique ideas) and then convergent thinking (combining those ideas into the best result).

Kyung Hee Kim at the College of William & Mary discovered this in May, after analyzing almost 300,000 Torrance scores of children and adults. Kim found creativity scores had been steadily rising, just like IQ scores, until 1990. Since then, creativity scores have consistently inched downward. “It’s very clear, and the decrease is very significant,” Kim says. It is the scores of younger children in America—from kindergarten through sixth grade—for whom the decline is “most serious.”

Read the rest of this article at: http://www.newsweek.com/creativity-crisis-74665