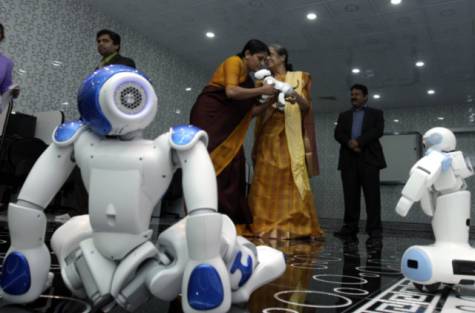 Abu Dhabi: Robot Teachers will soon be instructing students in basic math and other subjects at a private school in Abu Dhabi.

Merryland International School in Mussafah has launched what it claims is the first robotic lab in a UAE school, with more than 30 cutting edge robots including humanoids with built-in intelligence.

Nao can walk, talk and even recognise emotions. The programmable robot can also be used to explore research topics in robotics, computer science, human-machine interaction and even social sciences.
Then there is the Genibo Robot Dog which falls asleep if the students are not attentive.

I have sourced out some of the best and most advanced robots including humanoids, quadrupeds, hexapods, flying robots and pet robots from all over the world, Susheela George, Founder of Merryland, told XPRESS.

“Our aim is to mould future scientists, designers, engineers and leaders,” she added.

Susheela claims the school has invested half a million dirhams to set up the robotics lab.

The school will have robotics science as a subject integrated to their Cambridge International curriculum, and delivered through physics, ICT and math classes. Students from grade three to 12 will benefit from the lab.

“The course will start in full swing next year after the teachers have completed their training from Pittsburgh University in the US,” said Susheela.

George Fernandes, Head of Department, Information Communication Technology (ICT) at the school, said the robotics lab is just one of the many things in the pipeline. “We plan to go a long way in making robotics science a subject of study for our students. Children can learn from scratch the science of assembling a robot. At an advanced level, high school students will be taught how to programme robots with built-in intelligence,” said Fernandes.

The robotic lab was formally inaugurated on August 22 by Dr. John Netting, Director General of European Business Assembly (EBA), Oxford and Dr. Martin Moore-Ede and Dr. Donna Martin from Harvard University. The Indian and Pakistani ambassadors to the UAE were also present at the function held at the school’s campus in Mussafah.

NAO: The Next Generation of Robot

NAO Next Gen: Aldebaran Robotics launches a new generation of its humanoid robot

Aldebaran Robotics, the world leader in humanoid robotics, has released its latest version of the NAO robot — NAO Next Gen. The power of NAO Next Gen, the new fully programmable humanoid robot that has the most extensive worldwide use, is opening up new perspectives and fields of application for its users.

Aisoy1 II is the first social robot affordable for everyone. With new capabilities to awake your creative spirit.

Renewed and funny dialogs! Aisoy1 II’s behavior has evolved to a more proactive interaction. It has refined its sense of humor and tries to express it using its own words. It may be able to make you smile, or maybe your own style is a bit different from his. Anyway, please be comprehensive with Aisoy1 II, as he is taking the first steps as a comedian, its answers could surprise you!
More expressive with an evolved emotional engine! The new emotional engine is more proactive and robust. You will be able to understand the current emotional state of your Aisoy1 II much better and act accordingly. Besides, its new emotional engine provides more active behaviors and more independence and autonomy in its actions.
Multi-languages versions are now available.

Robots can caputre a child’s imagination like no other tool by creating a fun, physical learning process. “Kids recognise when they are learning something themselves — robots give them that,” says Larry Johnson, CEO, New Media Consortium, a US headquartered research organisation that specialises in educational technology.