“We are currently preparing students for jobs that don’t yet exist,
Using technologies that haven’t been invented,
In order to solve problems we don’t even know are problems yet.”

How Do You Prepare Someone For Something That Doesn’t Exist? 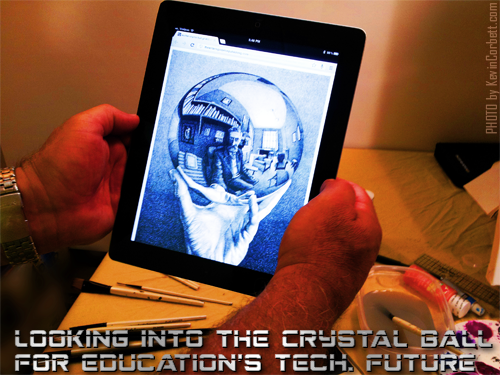 How do you train a person for a job that hasn’t even been invented yet?  In the old days, the mantra of high school teachers was that they were “preparing students for college.”

With a trillion dollars in student-loan debt (the next bubble to burst?), 56% college graduate unemployment, and the rise of social-media engagement scores, college may not be a what teachers should be solely focusing on. (Few high school teachers I talk to are even aware of the r/evolution occurring in higher education)

Fifteen years ago I had the opportunity to sit down with individual leaders of major groups at Microsoft (MSN, Games, programming, education). We talked about their jobs and the skills sets and what students needed to be successful. We talked about computer science degrees and engineering majors. A student I brought asked them about THEIR degrees.

They looked at each other and went around the table: Art Major (Line & Figure Design), Dance, Literature, & Education. They were shocked: All Liberal Arts degrees! This lead to a great discussion among themselves about what their liberal arts degree provided for them and the conclusion was that it gave them a multitude of different ways of approaching and looking at problems and asking questions. One talked about the patterns she loved in dance and how she was drawn to programming because she “saw” patterns in the code.

I was reminded of the above while reading Jeff Utecht’s ebook REACH: Building Communities and Networks for Professional Development, where he shares a story on page four, about meeting an American in Shanghai who coordinated programmers from China & India. Jeff writes:

When I asked him how a person with a BA in Art ends up with a job in the computer/communication business, he talked about his interview with IBM. What IBM was looking for was somebody who could learn, unlearn and relearn quickly. The degree was less important than the skills he had as a communicator and learner.

Technology is rapidly changing the world, cultures and what it means to be “employed”. In his Mobile Learning Conference Keynote address, Google’s Education Evangelist Jaime Casap shared how Google didn’t even exist when he was in high school.

Tools for Preparing for the Future: Educational Technology

I’ve been very critical of the snail-like implementation of “technology-as-a-tool” in education. I continue to be impressed with  educators at all levels who embrace the ubiquity of the Internet, devices, and developments to enhance, enrich and strengthen student learning. I admire administrators that allow staff to experiment and safely risk making those changes.

The leaps in civilization during the The Stone Age, The Bronze Age, & The Iron Age were made possible with increased uses of technology. The rapid evolution of the Internet in modern technological history has rendered very little advances in the systematic institution of education.

So, in preparing a student for a world we can only imagine, let’s start with envisioning the future classroom with a great infographic by EnvisioningTech:

Source: http://envisioningtech.com
This visualization is the result of a collaboration between the design for learning experts TFE Researchand emerging technology strategist Michell Zappa.