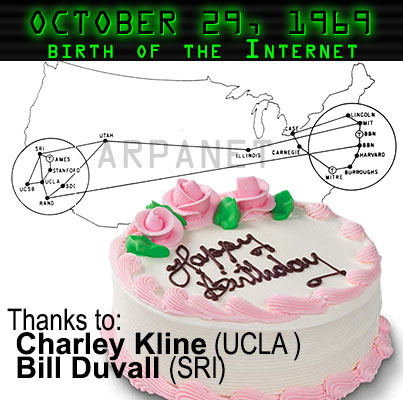 From the Computer History Museum:

On the evening of October 29, 1969 the first data travelled between two nodes of the ARPANET, a key ancestor of the Internet. Even more important, this was one of the first big trials of a then-radical idea: Networking computers to each other. The men who symbolically turned the key on the connected world we know today were two young programmers, Charley Kline at UCLA and Bill Duvall at SRI in Northern California, using special equipment made by BBN in Cambridge, Massachusetts.

The development of the ARPANET, which had no commercial application at the time, underscores the power of coordinated basic research and the importance of that research to our society. In the 1960s, computers were not interconnected and most were not even interactive. A few research groups were looking at the potential of networked computing and how distributed systems might be used as information repositories and collaboration tools, but they were hampered by a huge obstacle: they lacked a network to weave their projects together.

Can you remember a time without the Internet? And how about all of the changes that have occurred in the short 44 years since it was born.